Dachshunds were originally Badger hunters and were originally called "Dachs Kriege" which means Badger Warrior. They were also commonly used for fox or rabbit hunting. Some people also think that Dachshunds go back all the way to the Ancient Greeks. Dachshunds were originally bred to hunt Badgers but now they are great family dogs. Dachshunds have been kept by royal courts all over Europe, including that of Queen Victoria, who really liked them. Dachshunds have also now been cross bred with a corgi to create a dorgi. The queen has one! The flap-down ears and famous curved tail of the dachshund have deliberately been bred into the dog. In the case of the ears, this is to keep grass seeds, dirt, and other matter from entering the ear canal. The curved tail is dual-purposed: to be seen more easily in long grass and, in the case of burrowing dachshunds, to help haul the dog out if it becomes stuck in a burrow.he original German dachshunds were larger than the modern full-size variety, weighing between 14 and 18 kg. 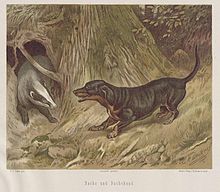 A depiction of a Dachshund hunting a Badger